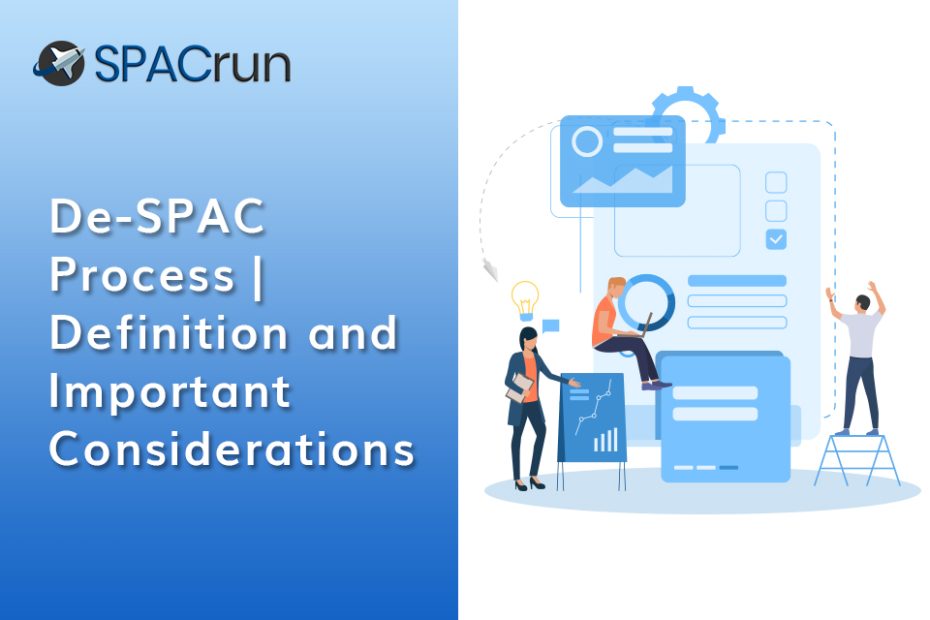 De-SPAC is the process of acquiring a private company that wants to go public via a Special Purpose Acquisition Company(SPAC). SPACs are the alternative routes to go public for private companies because they are faster and less costly than the traditional IPO. The aim of these SPACs is to acquire a private firm with the capital they collected from the SPAC IPO. These SPACs will have a specified period of time (2 years) to find a private firm and undergo De-SPAC. If they cannot, then they will have to return all their capital back to the investors.

Not all shareholders will be satisfied with the definitive agreement. As a result, the SPAC company must undergo the following steps before completing the merger.

The first step is the proxy vote. Once the SEC has decided that there are no regulatory issues with the merger, the SPAC requires shareholder approval. SPAC shareholders will vote for the target company and if the majority decides that the definitive agreement is satisfactory, then only the de-spac process can begin.

At first, a proxy statement/form S-4 is created that includes all the issues. Stockholders will be voting on those issues during the meeting. This statement will be filed to SEC and only after reviewing it, the statement is forwarded to all the shareholders. Once the shareholders have hands on the forwarded statement and can vote on the specified topic. Not all the shareholders are eligible to vote on every issue. The proxy statement will consist of a variety of issues like acquisition/merger approval, the election of board members, stock compensation plan approval, and more. Also, these shareholders may not be able to attend the meeting, in such cases, they can elect a different person or a member of the company to vote for them. If the shareholders do not like the proposed statement then they can turn it down and can ask for the redemption of their stocks.

Any founder or the investor from the management team of the SPAC can also vote in favor or denying the issues in the proposed proxy statement. Generally, founders have around 20-30% of the stocks purchased either at IPO or after IPO. As a result, the SPAC company will already have 20-30% votes in favor of the proxy statement and has a higher possibility to achieve the de-spac.

The Securities and Exchange Commission (SEC) on its proxy rules has provided the facility of redeeming the stocks of the SPAC company before de-spac. Any stockholders that have voted in opposition to the acquisition of a particular private company have the right to redeem their share at a NAV price. That means they can sell their shares to that SPAC at a price they bought it plus some interest (if any). But some SPACs can provide this offer to all the stockholders if they want to redeem their shares before the merger. One of the risks associated here is for the warrant traders. SPAC company might also announce warrant redemption before the merger. If that is the case you need to exercise those warrants before the expiration period. If not it will lose its value and will be worth zero. Also, if the de-spac never happened then the investors will get their money back but the money invested in warrants will be lost.

Once the merger is completed, the combined company will have to file a form called “Super 8-K”. This filing needs to be done within four business days after the business combination. Super 8-K is the filing that shows the registration of the merged company has now become public. Also, this form might include the financial statement of the merged company along with the information that will be presented for 10Q/10K.

The de-SPAC transaction is a vital part of any business combination and every stockholder must participate in the proxy votes. It gives an opportunity for investors to redeem their shares before the merger if they don’t like the target company. Every SPAC investor should always research their SPAC to find whether there is any definitive agreement news or not.

Keeping up with related news and rumors about your favorite SPAC might be tedious work.  Especially when the news you will find is not in real-time. This is where SPACrun comes in. SPACrun provides important SPAC news including definitive agreements, merger news, SPAC IPO, ticker news, and more. All the news is provided with an RSS live feed and filters with alerts sent via SMS and emails. Subscribe now to your free trial of SPACrun today.